Kirana is located at U. Velasco Avenue , Pasig City

Pasig City, the former provincial capital of Rizal province, is a highly urbanized city located on the eastern border of the greater Metro Manila metropolis. It is bordered on its west by Quezon City and Mandaluyong, on its east by Antipolo, Cainta and Taytay and on its east by Marikina. South of Pasig City is the bustling Makati CBD as well as Pateros and Taguig districts. Pasig is known as ‘The Green City’ for its reputation as the recycling industry capital of the Philippines.

The Suntrust Kirana development is located not far from the impressive glass-fronted Pasig City Hall where the Mayor’s office as well as other government departmental offices are located. A home right in the heart of this busy urban area will no doubt be poised to become one of the most desirable and most sought-after addresses in Pasig for its easy proximity to work, shopping and recreation.

Despite its urban location, however, Suntrust Kirana also provides all the comfort and serenity of a safe and secure suburban home, making this a perfect investment for a high-yield rental property as well as a convenient home in the city.

The bustling Pasig Public Market is located only 700 meters away from the main gate of Suntrust Kirana, making it easily accessible for shopping for all your daily fresh foods and other necessities, or a just place to go and grab a quick bite to eat in the morning.

A little further away, yet only a few minutes’ drive from home is the ‘city-within-a-city’ of the famous Ortigas Center business district, with its sprawling one-square kilometer of land area. This is the economic powerhouse of Pasig. The Ortigas Center is home to a spellbinding array of shopping malls, office and residential towers, hotels, restaurants and nightlife. Some of the biggest multinational names are headquartered here, including the San Miguel Corporation, Jollibee Foods, HSBC’s Philippine branch and many others.

The colossal SM Megamall, the third largest mall in the world and the largest mall in the Philippines, is also to be found right here in the Ortigas Center, ensuring that there will never be a shortage of retail therapy for the residents of Suntrust Kirana.

Also, located only 7.5 kilometers away from Suntrust Kirana is the financial district of Bonifacio Global City in Taguig, with its sophisticated mix of multinational headquarters, hotels, high end residences and retail and commercial buildings.

For families with school-going children or older kids in university, there are schools and institutes of higher learning located within an easy distance from home at Suntrust Kirana, including a selection of international schools. Some of the nearby educational institutions include:

Other shopping malls nearby include:

For all the family’s healthcare needs, there are several hospitals and medical centers located nearby. Take your pick from these world-class facilities:

Nearby places of interest for recreation, entertainment and family outings:

Suntrust Kirana is located on Urbano Velasco Avenue, and has a convenient FX transport terminal within walking distance from home. 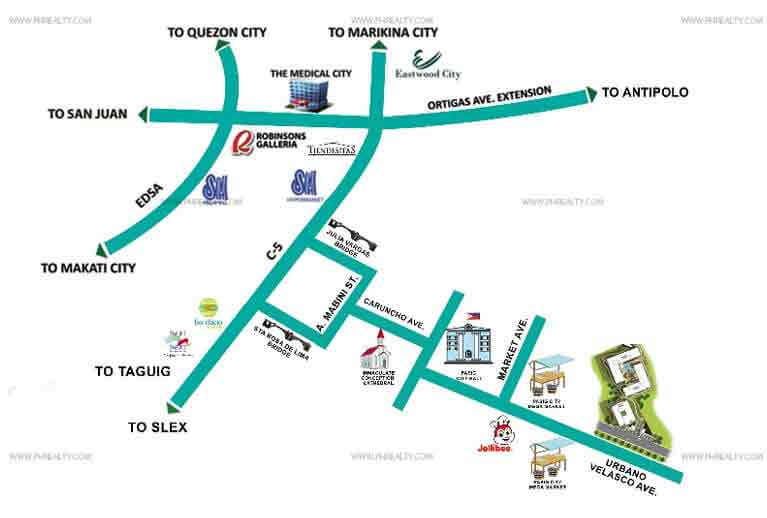